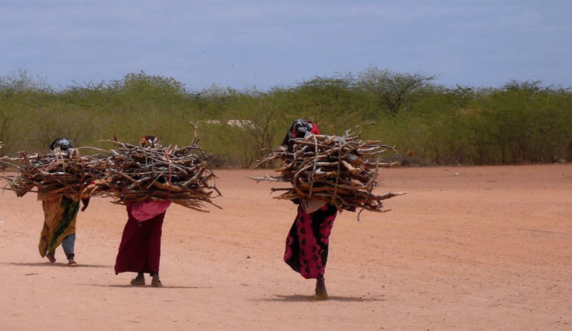 Nowhere are the problems associated with wood-fuel scarcity more acute than in refugee and IDP (internally displaced person) settings. These settings that are typified by extreme overpopulation, barren landscapes, insecure surroundings and fierce tensions with local residents. The human and environmental consequences that flow from these conditions are severe: refugees and IDPs are forced to spend countless hours foraging for wood, the women who perform this task are exposed to rape and other forms of violence, the congested camps are at constant risk of being set ablaze by cooking fire, and the vicinity around them become completely deforested. 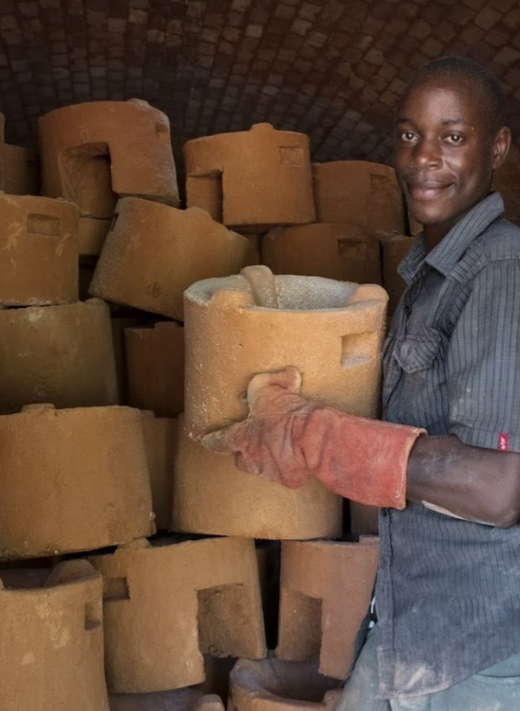 Commencing with the establishment of its maiden programs in Darfur and Northern Uganda in 2006, Lifeline has been promoting the use of clean cook stove technologies to relieve the plight of refugees and IDPs for over 14 years. Over that period, Lifeline has produced and/or distributed over 150,000 fuel-saving stoves to families displaced by human and natural disaster in Somalia, Sudan, South Sudan, Burundi, Kenya, Congo, Uganda and Haiti. As a result of this extensive experience, Lifeline is widely recognized as a “go-to” agency for implementing such interventions in Sub Saharan Africa and, as such, has been frequently called upon by the UNHCR, WFP and other relief agencies for technical advice and support in addressing wood-fuel scarcity problems. 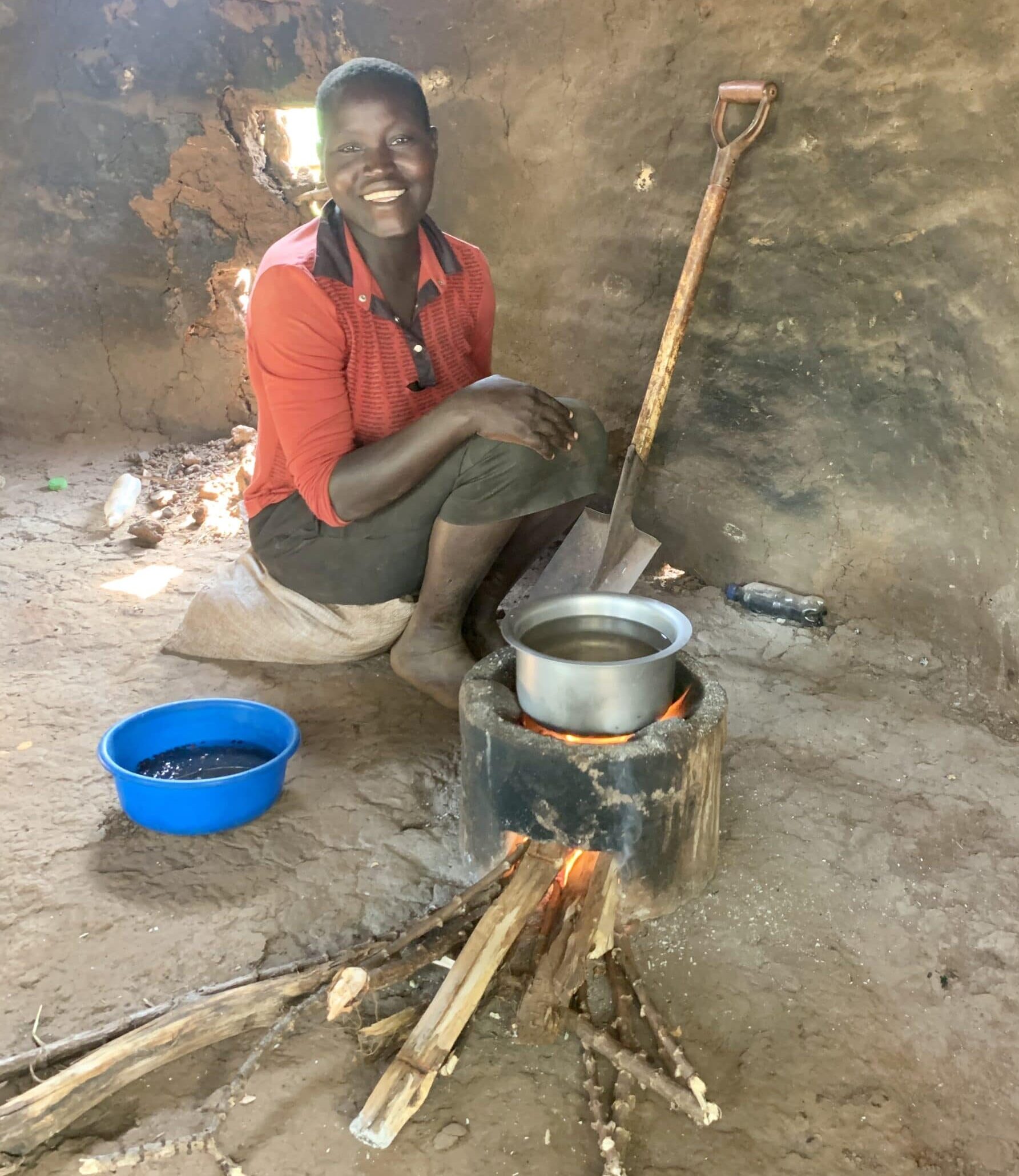 Since 2016, over 1.3 million refugees from South Sudan and the Democratic Republic of Congo have been forced to flee for Uganda owing to the violent civil conflicts that have ravaged those countries. This massive influx has severely strained the environment surrounding the sprawling camps that have sprouted up inside the Uganda border, creating tension between the refugee and host communities as they compete for wood fuel and other scarce resources.

Commencing in 2017, Lifeline began addressing these problems through a livelihood and clean energy initiative (“SAFE”), which included the distribution of fuel saving household stoves to vulnerable families, the installation of fuel-saving institutional stoves in schools and refugee reception centers, the establishment of energy “kiosks” to support the sale of improved cook stoves and other energy efficient products, and other capacity building measures.

Lifeline’s fuel saving stove initiatives have been profoundly impactful in alleviating environmental degradation at the same they time that they have promoted economic opportunity and resilience for refugee and host communities: 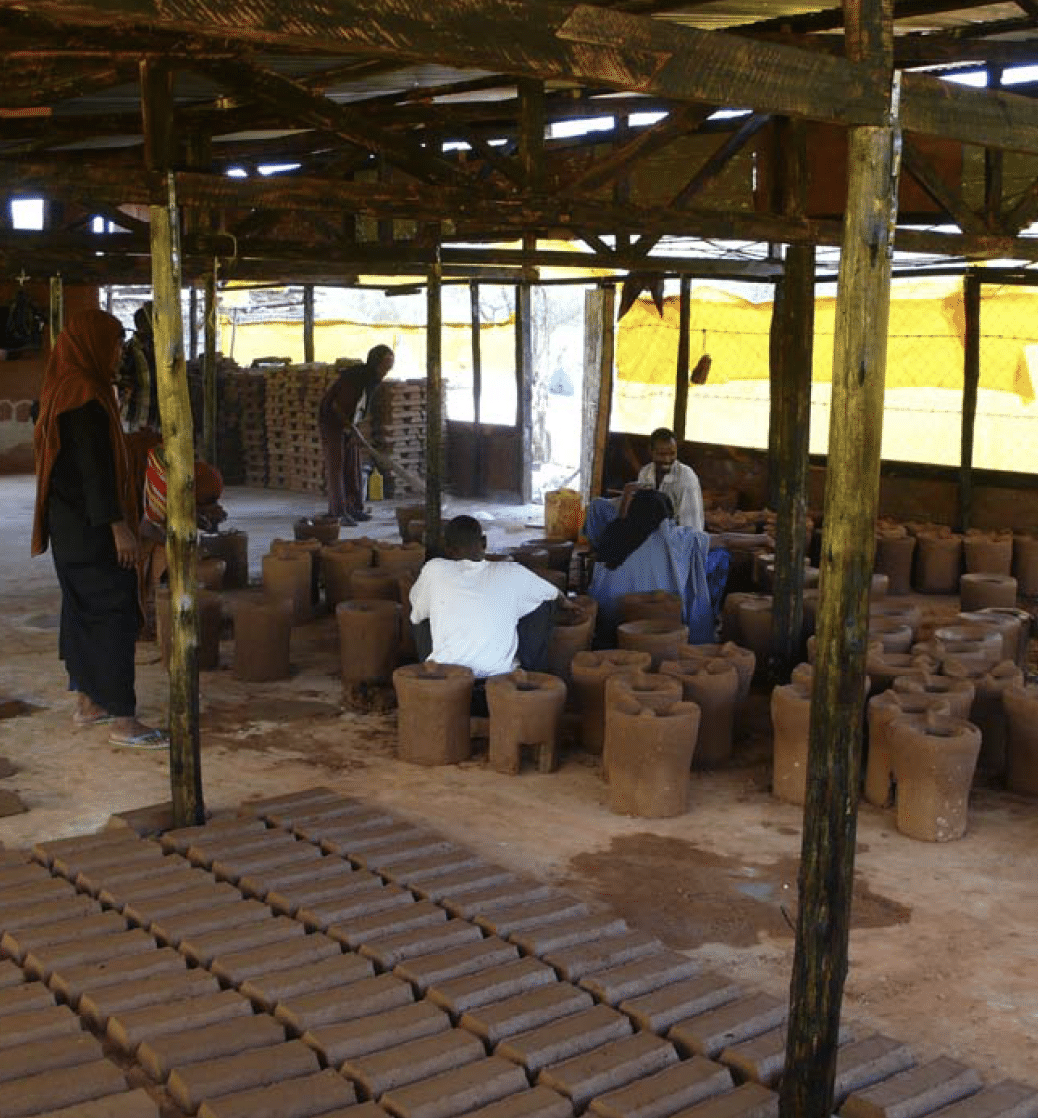 In 2008, the United Nations Hight Commissioner for Refugees (UNHCR) invited Lifeline to support its efforts in Dadaab – a remote outpost in Northeast Kenya that had long been playing host to refugees from Somalia and whose population had swelled to over 300,000 due to the escalating civil conflict in that country.

This influx had severely strained the fragile desert environment and all but decimated what was left of the forest surrounding Darfur’s refugee camps, forcing UNHCR to spend inordinate sums to ship firewood into the camp by the truckload from afar. Those efforts, however, fell well short of satisfying the demand and so women still found themselves having to stray further and further from the camps to collect wood for cooking – often at grave risk of sexual violence.

Stepping into the breach, Lifeline helped relieve Dadaab’s dire wood situation by creating two cook stove production facilities, which provided income generating opportunities to a staff of three dozen refugee workers, and by providing training on stove maintenance and usage to approximately 45,000 households. As a result, over the span of three years, Lifeline was able to relieve the plight of some 225,000 refugees, saving them millions of hours in time that would otherwise have been spent foraging for wood. 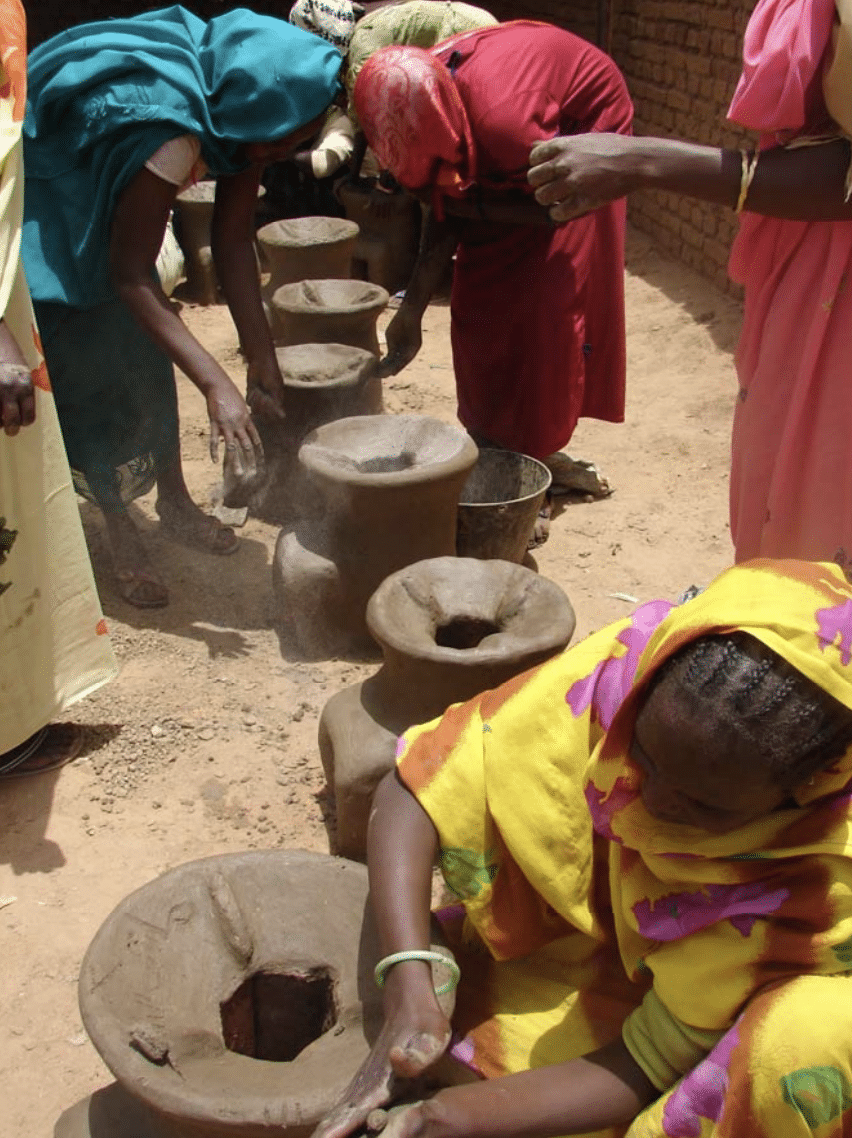 In 2006, Lifeline launched its maiden cook stove program in Darfur where over 1.5 million internally displaced persons (IDPs) had been uprooted from their homes in a terror campaign perpetrated by the Sudanese Government and its allied militia force known as the “Janjaweed”.

As Darfur’s arid and undeveloped geography was unable to support the burgeoning populations of the IDP camps that were sprouting across the region, women and girls found themselves having to spend four to six hours a day in the wilderness collecting wood for cooking. Thousands were raped and many ended up selling a portion of their meager food rations as a means of protecting themselves from gender-based violence.

In an effort to address this problem, Lifeline engaged local ceramicists to produce the insulated bricks that formed the core of its fuel-saving stoves and trained some 16,000 women on how to construct, maintain and use them over a period of just two years. As a result, Lifeline was able to cut the amount of wood these women needed for cooking nearly in half and to profoundly improve the lives of more than 80,000 displaced persons in North and West Darfur. 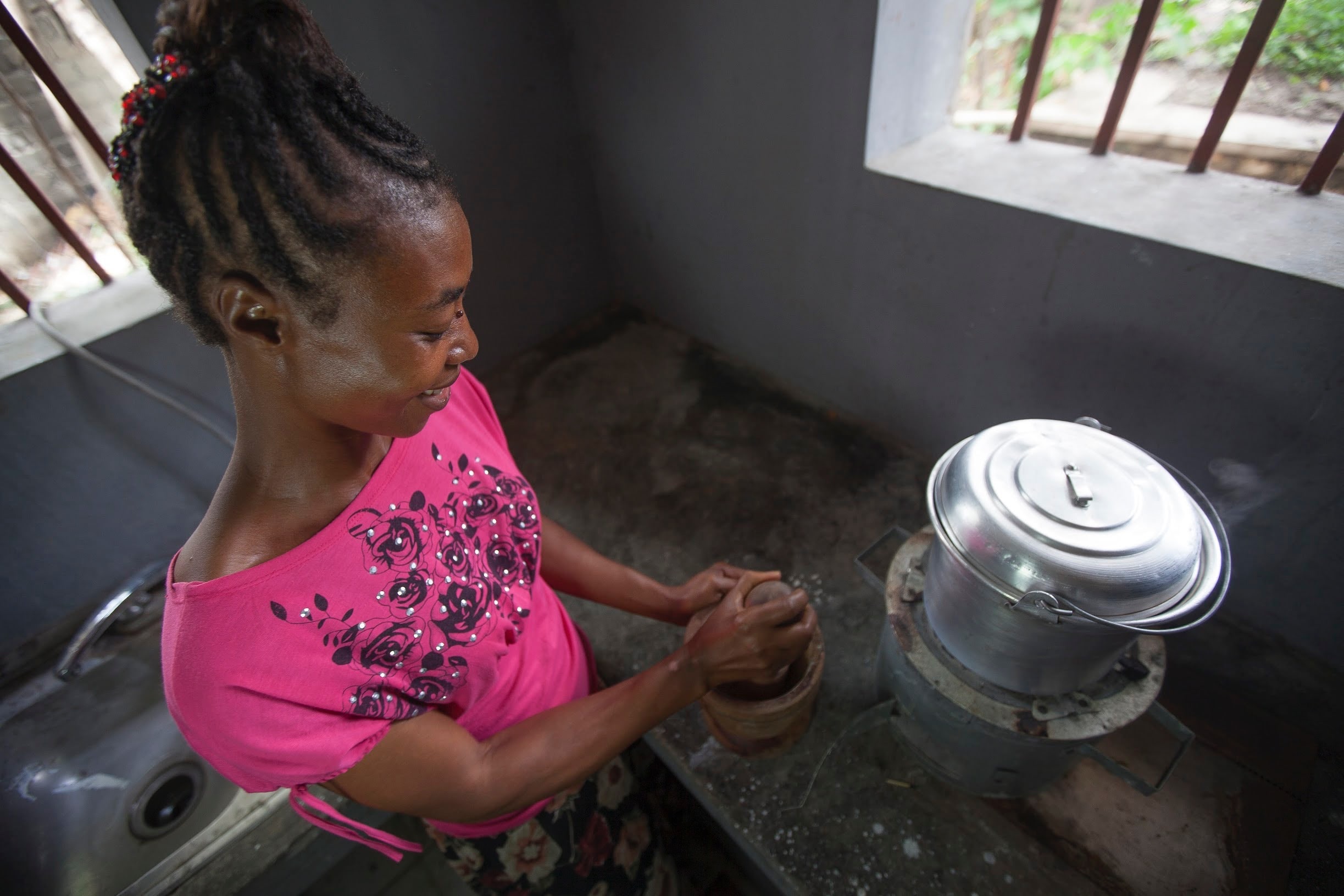 In January 2010, Haiti was ravaged by a devastating earthquake that killed an estimated 250,000 Haitians and rendered five million more homeless, about one-third of whom were temporarily housed in make-shift camps for the internally displaced.

Just weeks after the Earthquake hit, Lifeline leapt into action, setting up operations in Port-au-Prince and spearheading the effort to bring fuel-saving stoves to the displaced population. Over the course of the next year, Lifeline distributed approximately 13,000 fuel-efficient stoves to families living in refugee camps, benefiting about 65,000 individuals, and, in partnership with WFP, installed another 400 institutional stoves in primary and secondary schools, benefitting some 60,000 students.

Building on these efforts, Lifeline then spent the better part of the next decade nurturing markets for fuel saving stoves and helping a local social entrepreneurship organization provide the populace with affordable and sustainable access to those stoves.

Having established a reputation as one of the world’s premier authorities on the operation of fuel-efficient energy projects, Lifeline has been frequently called upon by major international agencies (e.g., the United Nations High Commissioner for Refugees, the United Nations Development Program, the World Food Program, and the Agency for International Development) to provide technical assistance and advice in connection with the formation and implementation of strategies to address the scarcity of wood-fuel resources in crisis affected areas.

For example, Lifeline is currently helping WFP design fuel-saving stoves that can satisfy the peculiar needs of some 1.2 million Somalian, Sudanese and Eritrean refugees residing in that country; Other instances in which Lifeline has provided critical technical assistance and advice to international agencies include the following:

In addition, Lifeline was called upon by US AID to help author its toolkit on implementing “Fuel Efficient Stove Programs in Humanitarian Settings” and was selected by UNHCR to co-author its global energy strategy for displaced communities.